God sends certain people into our lives to help us see the Savior more clearly (Mosiah 14-16). I will refer to these people as “Abinadi’s”. They can be prophets (like the Abinadi in this account),  or leaders, or parents, or teachers, or friends, or whomever the Lord chooses. We don’t always appreciate the Abinadi’s God put in our lives. They can make us feel uncomfortable. Sometimes they point out things that we are doing wrong. But God send Abinadi’s into our lives because He loves us and He is trying to save us. Unfortunately many times we ignore the Abinadi’s that God sends. And sometimes we may even burn them! (Mosiah 17) If I could get one message across with this post it would be: DON’T BURN YOUR ABINADI’S! They are your friend, not your foe. We tend to burn our Abinadi’s when we confuse friends with fiends.

President Ezra Taft Benson, then the President of the Quorum of the Twelve Apostles, gave a talk entitled, “Fourteen Fundamentals in Following the Prophet”. I feel that it is worth reviewing the headings for each of those fundamentals. Those who do not accept these fundamentals will eventually end up burning one of the most important Abinadi’s that the Lord has provided them–the living prophet. He said that, “our salvation depends on them.” King Noah’s certainly did! Here they are:

1. The prophet is the only man who speaks for the Lord in everything.

2. The living prophet is more vital to us than the standard works.

3. The living prophet is more important to us than a dead prophet.

4. The prophet will never lead the church astray.

5. The prophet is not required to have any particular earthly training or credentials to speak on any subject or act on any matter at any time.

6. The prophet does not have to say “Thus Saith the Lord,” to give us scripture.

7. The prophet tells us what we need to know, not always what we want to know.

8. The prophet is not limited by men’s reasoning.

9. The prophet can receive revelation on any matter, temporal or spiritual.

10. The prophet may advise on civic matters.

12. The prophet will not necessarily be popular with the world or the worldly.

13. The prophet and his counselors make up the First Presidency—the highest quorum in the Church. 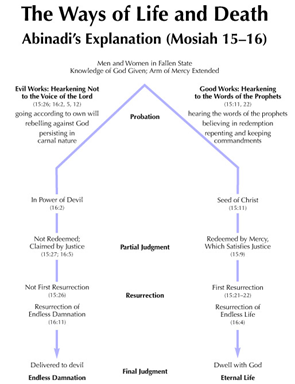 Abinadi, in Mosiah 15–16, expounds upon the ways of life and death to King Noah and his wicked priests. In this provocative sermon, Abinadi warns Noah that obeying God also means following his prophets, namely, Abinadi. Abinadi preaches that if men and women do not listen to the voice, or mouthpiece, of the Lord, they necessarily follow the way of death. Abinadi also speaks of partial judgment before the resurrection, a concept not found in Alma’s, Jacob’s, and Benjamin’s speeches. (View PDF)

Fortunately there is ONE who is willing to listen to the Abinadi that God has sent (Mosiah 17:2). His name is Alma (Tomorrow’s post will focus on the importance of this ONE believer). Eventually  even King Noah was about to succumb to the preaching of Abinadi, but the wicked priest’s put on the peer pressure and King Noah “was stirred up in anger against him, and he delivered him up that he might be slain.” (Mosiah 17:11-13)

This chart shows the lineage of Alma and approximate life spans of him and his descendants mentioned in the Book of Mormon. Alma’s conversion while listening to Abinadi (see Mosiah 18:1) and Alma’s baptism at the Waters of Mormon (see Mosiah 18:14) were important events for himself and for the Nephite civilization. Not only were Alma’s descendants able to receive the blessings of the gospel, but for over four hundred years many of them were key prophets and principal keepers of the plates of Nephi who in turn spread the gospel to the general population. (View PDF)

The following illustrations may be helpful in understanding and remembering what Abinadi taught in these chapters.

Husband, Father, Teacher END_OF_DOCUMENT_TOKEN_TO_BE_REPLACED
This entry was posted on Monday, May 6th, 2013 at 11:51 PM and tagged with Abinadi, Alma, bomtc, death, Eternal Life, Ezra Taft Benson, Father, fire, follow the prophet, Isaiah, Jesus Christ, Joseph Smith, King Noah, Law of Moses, prophets, redeem, resurrection, sacrament, sacrifice, seed, Son, the Book of Mormon, Translation Challenge, wicked priests and posted in The Book of Mormon. You can follow any responses to this entry through the RSS 2.0 feed.
« #BOMTC Day 29, May 5~Mosiah 11-13 or Pages 168-174: Back to Basics
#BOMTC Day 31, May 7~Mosiah 18-21 or Pages 182-188: Count the Ripples! »