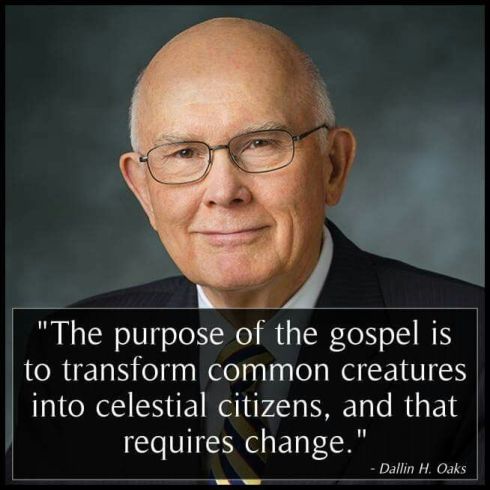 Elder Dallin H. Oaks of the Quorum of the Twelve Apostles taught:

“The purpose of the gospel is to transform common creatures into celestial citizens, and that requires change” (“Repentance and Change,” Ensign, Nov. 2003).

As recorded in Alma 19–20, King Lamoni experienced a change of heart, leading to the conversion of his wife and many of his people. Ammon and King Lamoni then traveled to the land of Middoni to deliver Ammon’s imprisoned brethren. On the way, they encountered Lamoni’s father, who was king over all the Lamanites. The king was astonished by the words of Lamoni and Ammon, by Ammon’s strength, and by Ammon’s love for Lamoni. His heart was softened, and he assured them that Ammon’s brethren would be released from prison. He expressed a desire to learn about the words he had heard from his son and Ammon. Because of Ammon’s testimony and example, many people felt the influence of the Holy Ghost and were taught the gospel and converted.

Aaron, one of Ammon’s brothers, attempted to teach the Amalekites and Amulonites about Jesus Christ and the Atonement, but the people rejected him. Then he preached in Middoni, where he and some of his companions were eventually imprisoned. They remained faithful during their time of adversity, and they continued their mission to share the gospel after Ammon and King Lamoni secured their release. After Lamoni’s father was prepared through the example of Ammon, he learned from Aaron about how to be “born of God” (Alma 22:15). The king learned that by repenting of his sins, he could come to know God and eventually receive eternal life. The faithfulness of Aaron and his brethren helped many Lamanites come to know God and His way of redemption.

It has been my experience that the more I UNDERSTAND the gospel, the greater VALUE I place upon it.

Use the “Degrees of Discipleship” scripture-chain listed below as an illustration of this principle of change and conversion.

CHANGE: Alma 20:20, Because the Lord loves us, He gives us “humbling experiences” to help us change. We must learn to rely on the Arm of the Lord and not on the arm of the flesh.

3rd Degree Disciple: Alma 20:23, Oddly enough Lamoni’s father values his kingdom even more than his life at this point. What does a dead king do with half a kingdom anyway?

CHANGE: Alma 20:24-27, Feeling sincere love can help us become “desirous to learn” the gospel. “No one cares how much you know, until they know how much you care.”

2nd Degree Disciple: Alma 22:15, As a result of Aaron’s teaching Lamoni’s father was willing to give up his kingdom for God’s Kingdom.

CHANGE: Alma 22:16-17, “Hope is a memory of the future.” Feelings of faith and hope compel us to approach the throne of grace in our utmost humility. 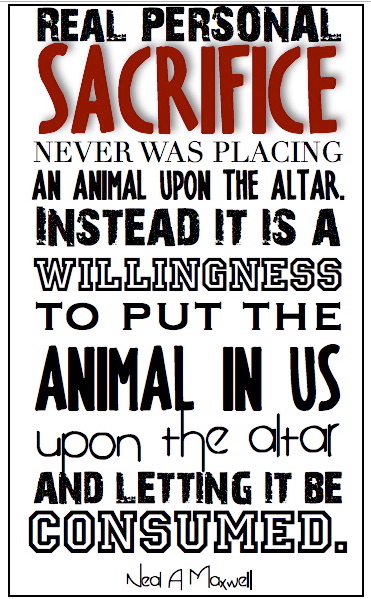 “So it is that real, personal sacrifice never was placing an animal on the altar. Instead, it is a willingness to put the animal in us upon the altar and letting it be consumed! Such is the “sacrifice unto the Lord … of a broken heart and a contrite spirit,” (D&C 59:8), a prerequisite to taking up the cross, while giving “away all [our] sins” in order to “know God” (Alma 22:18) for the denial of self precedes the full acceptance of Him.” (Elder Neal A. Maxwell, “Deny Yourselves of All Ungodliness,” Ensign, May 1995. Emphasis added.)

Like Lamoni’s father, we must be willing to sacrifice ALL things to be born of God. In the Lectures on Faith, we learn the importance of sacrifice in our eternal progression:

“Let us here observe, that a religion that does not require the sacrifice of all things never has power sufficient to produce the faith necessary unto life and salvation; for, from the first existence of man, the faith necessary unto the enjoyment of life and salvation never could be obtained without the sacrifice of all earthly things. It was through this sacrifice, and this only, that God has ordained that men should enjoy eternal life; and it is through the medium of the sacrifice of all earthly things that men do actually know that they are doing the things that are well pleasing in the sight of God. When a man has offered in sacrifice all that he has for the truth’s sake, not even withholding his life, and believing before God that he has been called to make this sacrifice because he seeks to do his will, he does know, most assuredly, that God does and will accept his sacrifice and offering, and that he has not, nor will not seek his face in vain. Under these circumstances, then, he can obtain the faith necessary for him to lay hold on eternal life” (Lectures on Faith [1985], 69. Emphasis added.).

Elder Shayne M. Bowen teaches: “The Atonement of Jesus Christ is available to each of us. It can clean, reclaim, and sanctify even you.”

Just as a garbage dump can be turned into a beautiful park, a life of sin can be cleansed and changed through the Atonement of Jesus Christ.

It Is Never Too Late

Message given by Elder Jeffrey R. Holland in the Saturday Afternoon Session of General Conference on March 31, 2012

Apostles of Jesus Christ testify of the Savior’s power to heal, change, and purify us through His Atonement.

This is a member-made non-official Mormon Message.