Although conversion is miraculous and life changing, it is a rather quiet and personal miracle. The Book of Mormon provides the following descriptions of people who are converted to the Lord:

Deep conversion often comes after many trials and much testing (see Luke 22:32; D&C 112:12–13). There is perhaps no greater example of the principle of true conversion than that of the Anti-Nephi-Lehies, or “People of Ammon”. (FYI: Dr. Hugh Nibley has found ‘a Semitic and common Indo-European root corresponding to “anti” that means “in the face of” or “facing,” as of one facing a mirror, and by extension either “one who opposes” or “one who imitates.”’ (Quoted in Eldin Ricks, Book of Mormon Study Guide, p. 63.) Thus the term ‘Anti-Nephi-Lehies’ might refer to those who imitate the teachings of the descendants of Nephi and Lehi” (Daniel H. Ludlow, A Companion to Your Study of the Book of Mormon [1976], 209–10).)

“True conversion will strengthen your capacity to do what you know you should do, when you should do it, regardless of the circumstances” (“Full Conversion Brings Happiness,” Ensign, May 2002). The thousands of Lamanites who accepted the gospel demonstrate that conversion is a spiritual change—becoming a new being through the power of God. The scriptures describe the Anti-Nephi-Lehies as being so “converted unto the Lord” (see Alma 23:3,6,8,13; 24:6), that they “never did fall away” (Alma 23:6).

The Anti-Nephi-Lehies who were “converted to the Lord” made a covenant to lay down their weapons of war. They buried them deep in the earth as a testimony of their desire to change (Alma 24:17-18). The Amalekites and Amulonites, who were former Nephites, stirred up many unconverted Lamanites to anger against their king and the Anti-Nephi-Lehies. Many of the Anti-Nephi-Lehies sacrificed their lives rather than break their covenant with God (see Alma 24:6–19). 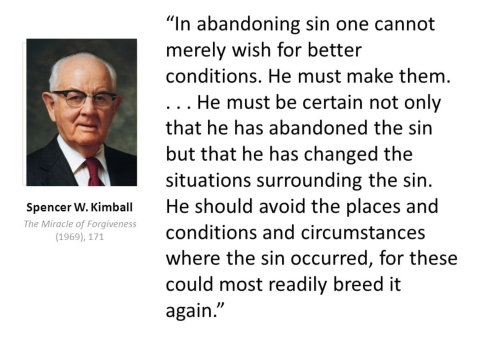 We have the primary responsibility for our own conversion. No one can be converted for us, and no one can force us to be converted. However, others can help us in the process of conversion. Our capacity to experience a mighty change of heart will increase as we strive to follow the Savior’s perfect example, study the scriptures, pray in faith, keep the commandments, and seek the constant companionship of the Holy Ghost. (see True to the Faith, “Conversion”)